Whats goin on guys, Jerry here and I’m back with a new mechanical keyboard. This is the CM Storm Quickfire TK by CoolerMaster.
I’ve been in the market for a mechanical keyboard and when I got the opportunity to pick this one up I couldn’t pass it up.

You’ll notice that the Quickfire TK looks a little different than your typical keyboard being that the dedicated arrow keys and home, page up & down keys have been removed. Those keys have actually been moved over to the numpad which makes for an overall more compact form factor. Now personally I’d rather have this layout with a numpad than some of the other ones that ditch it all together because I’m not losing any functionality. All the keys that I need on a day to day basis are still there. 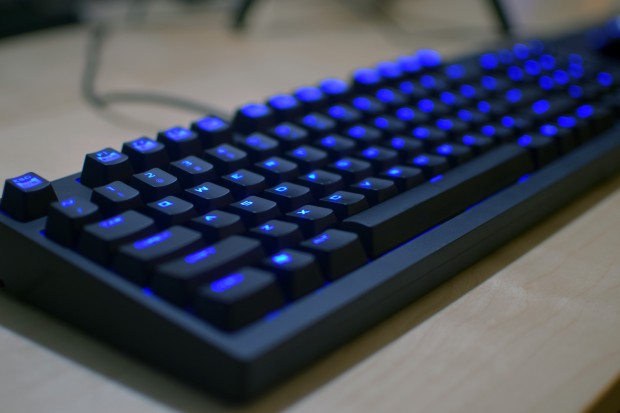 Aside from the compact design, you also get a few different controls over your F keys. You can do this like enable or disable they keyboard backlighting, lower or increase the intensity of they backlighting and change the backlighting mode to do things like pulse or enable backlighting only on the WASD keys. I do wish you could change the last option as I personally use ESDF for gaming although I understand I’m in the minority.

You also have media keys that allow you to play or pause your media player and control your volume. There’s also a Windows lock key and a 6-key to n-key rollover toggle on the escape button. Now from what I understand about n-key rollover via USB is that it’s not natively supported and there is basically a system hack that is done to get it to work. So your mileage may vary on that depending on the OS that you use. 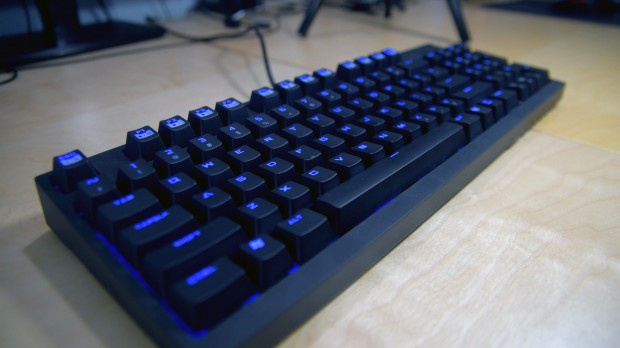 When using this keyboard in gaming, I really didn’t notice much difference as the actuation point was pretty much the same as my old rubber dome keyboard. Shockingly the biggest difference I felt was in typing. I set a new PR and improved my typing by 8 words per minute. That is something I was not expecting from this keyboard since I’ve heard brown switches were best for typing.

Now each key is full LED backlit and there is a blue plate just underneath the switches that helps with illumination. All of the light is evenly distributed and really bright. Actually too bright for my tastes but luckily you do have the ability to turn that down or off altogether.

One thing I really like about this keyboard is that you can lock the function button. Instead of holding that button down while pressing one of the F keys, you can lock it so that the F keys secondary function is always active. So if I want to mute the sound, I can simply press F9 instead of having to hold Function and then press F9. I prefer keyboards with dedicated media keys but if I can’t have that, this is a good compromise. 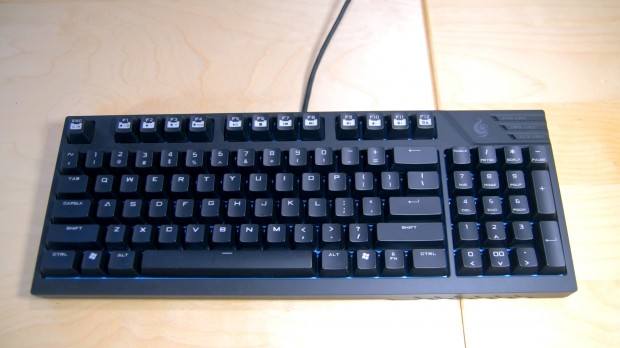 Now some of you may be wondering how the numpad works with the consolidated layout. Basically the numlock and scroll lock buttons determine the functionality of the keys. Numlock off and scroll lock on means the arrow keys will scroll up, down, left, right as expected and numlock on means they will function as numbers. The same goes for the other keys like Home and Page Down. I really like this because even though the keyboard is smaller than normal you aren’t giving up any keys.

Aside from that the keyboard has pretty solid construction, although it is lacking any USB passthrough and it comes with a removeable braided USB cable. It also has nice sturdy rubber feet that keep the keyboard really planted to your desk.

Now I’m not thrilled with the pricing in the mechanical keyboard market at the moment but if you’re looking for something compact and well built, this is definitely it. Plus, it’s got authentic switches. 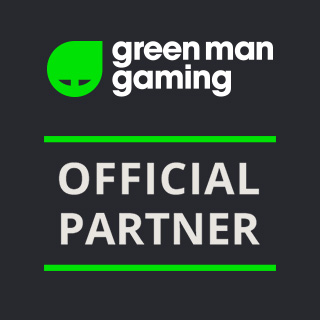